You read the title correctly, the correlation (link, not causality) between autism/autistics and vaccines is that autistic people are over-represented in scientific fields (due to our awesomeness), so it may have been the case that an autistic person/group developed vaccinations (please note this is satire, and a commentary on the debunked vaccine-autism myth).

You will be aware of the debunked (disproven) myth that vaccines (most commonly the MMR) cause autism.

We want to make very clear that this is not the case, and never has been  (consequently, the “study” this myth grew from was so poor the paper was eventually retracted).

Quite simply, the reason we are autistic is because that is the nature of evolution – all of humanity is neuro-diverse, and made up of neuro-divergent individuals who do not experience the world in a (societally) neuro-typical way – like us autistics.

The vaccine-autism controversy, that there is seemingly a correlation/link between changes in child development following vaccination, has been debunked again and again (see info-graphic and recent study below). The reason this myth still sticks around is because of a), the way many perceive autism as a pathology, a disorder, as opposed to a difference, and b), this pathologising leads non-autistics (and sadly some autistics) to want a “cure” – if they know the “cause” of being autistic (e.g. vaccines), then they can look for a “cure”.

It is not possible to “cure” being autistic, quite simply because we are not diseased, disordered, or broken in any way.

I would not recommend getting into a debate with anti-vaxxers: it is time-consuming, distressing, and pointless. Typically anti-vaxxers are those who view their autistic children as “having autism”, and if only they hadn’t vaccinated them they would know the “normal” child underneath. This is a particularly harmful way to be viewed. But please also understand that these parents are unaware of the inaccuracy of their convictions and the harm that it causes their children, and how this harm carries into autistic adulthood.

Typically, anti-vaxxers are scared people who want to cling to a reason for their child not being what they expected.

But, you do not have to buy into this narrative, hence our actively recommending you avoid these debates.

For your own understanding and reassurance, here are the facts about the so-called vaccine-autism link.

“Yet again, more research published in American Academy of Pediatrics (with over 80,000 children born over a 4-year period in the USA) showed that the prenatal ‘Tdap’ vaccination (i.e., tetanus, diphtheria, acellular pertussis) was not associated with increased rates of autism in children. The retrospective study was carried out on mother-child pairs with deliveries between 2011- 2014 at Kaiser Permanente Health Care Southern California hospitals and demonstrated no association. Many pregnant women do not take up this vaccination due to the debunked and unproven assertion of this link. It is hoped that such research will quell anxieties around this vaccination.” – Becerra-Culqui et al., 2018

And this useful breakdown of the literature (by Chloe), which includes lovely info-graphics (if you don’t fancy reading the above journal article):

Why do we have autistic people? What are the ‘causes’?

Quite simply we don’t really know: arguably, and advocated by the autistic community, autistics are not people with a disorder, disease, faulty or broken brain.

We are people with different types of brain/differently wired – we develop differently to neuro-typicals. Remember, autism is a developmental “condition” (difference), not a disorder.

It is likely that autism is the result of many contributing factors (Pua et al., 2017):

Pua et al., (2017) conclude: there are NO definitive neuroimaging markers found for autism – in other words, we can’t actually find what makes autistics different.

Importantly, the original paper that anti-vaxxers pin their argument on (Wakefield, et al., 1998) states how they did not find a link – but once the idea that there could be a link got into the public domain it became impossible to stop. 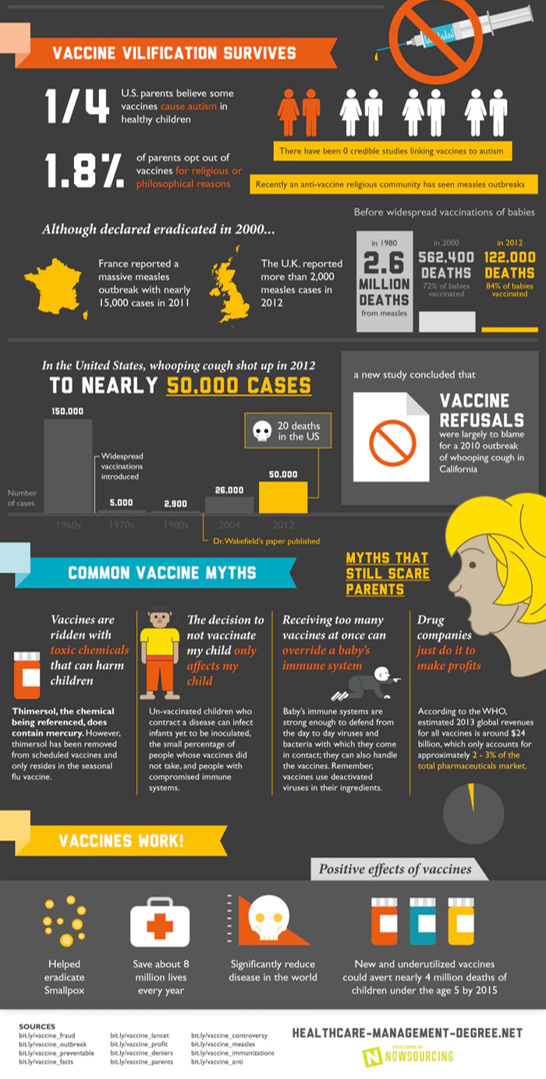 We hope this helps you understand the debate and gives you the facts: nothing, other than evolution “causes” us to be autistic, we are different, not disordered.

Mordecai, A. (2014, June 27). 16 years ago, a doctor published a study. It was completely made up, and it made us all sicker. Retrieved January 16, 2018, from Upworthy: http://www.upworthy.com/16-years-ago-a-doctor-published-a-study-it-was-completely-made-up-and-it-made-us-all-sicker

One thought on “Autistics cause vaccines…”